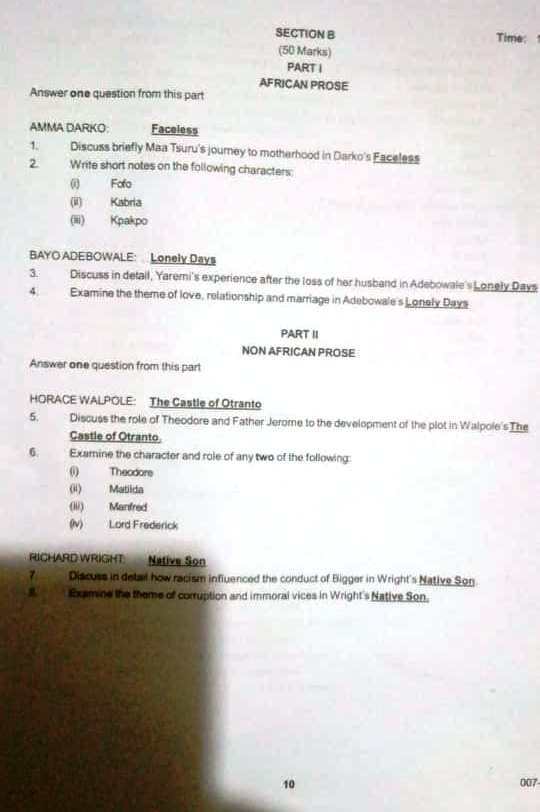 PART I
(Answer ONE Question from this Section)

(2i)
FOFO:
Fofo is the fourth child of Maa Tsuru. She is fourteen years old and lives on the street. She is a dreamer and would often drift away in her own world of fantasy. She is quite brave and intelligent. She tactfully resists poison's rape attempt and disguises as boy to protect herself from further assault by poison and his gang.
Through her character, the reader gets more insight into the circumstances surrounding Baby T’s Death.

(2ii)
KABRIA:
The wife of Adade and mother of three energetic children, kabria worked with MUTE, A non Governmental Agency and lived in a decent neighborhood in Accra which contrasted sharply to the situation in Sodom and Gomorrah. With a problematic car called creamy, she tried to combine career with her responsibilities as wife and mother. She was instrumental to Fofo's rehabilitation and contributed in no small measure to unraveling the mystery surrounding Baby T’s death

(3)
Yaremi is the widow of Ajumobi, a very brave and successful Hunter who gave in to the cold hands of death after a brief illness that couldn't be cured by the village herbalist who was called to cure him. After the death of her husband, Yaremi suffers all kinds of ill treatments From her kinsmen and the villagers, ranging from accusation of murder and horrible traditional widows' rites.
She is always overwhelmed with sorrowful thoughts but find solace in the fact that her husband, Ajumobi, did not die an abominable death. She is left to stay with her grandson, Woye, who assist her in domestic chores and taffeta business. Woye also keeps Yaremi company, and this to a large extent, fills the vacuum which the death of Ajumobi created. No wonder Yaremi does everything possible to restore the health of Woye when he is sick. Woye eventually becomes well again, and Yaremi's joy knows no bound.
More often,. Yaremi reminisces on her past relationships with her husband who was a strong defence to her.
She recollects his caring attitude and constant provision of bush meat to her, unfortunately his death has created an irreplaceable vacuum in her life, and subjected her to abject loneliness ,
At first, she tries hard to fall the new life of loneliness but later becomes accustomed to her predicament, she moves on with life and forges ahead in business through which she becomes and independent and important figure in the village of KUFI, to the admiration of all and sundry.
Yaremi’s success is success is for all women in the village of kufi, as she usually makes food donations such as corn, pumpkin, etc to them. However Yaremi’s outstanding success becomes a threat to the men of kufi because according to them “no woman of the land had ever been allowed to worm her way into a position of prominence in village matters. While most men sees her as someone to be avoided, some others long for her company.
Yaremi violates the widows' traditional rite of picking a new Cap, that is selecting a new man for marriage by maintaining her love for her late husband, Ajumobi.

PART II
(Answer ONE Question from this Section)

(6i)
Theodore; The hero of the story, Theodore is first presented as the peasant whom Manfred wrongfully imprisons for an offhand observation. Well-spoken, noble, and brave, he bears a striking resemblance to the statue of Alfonso the Good. After he helps Isabella escape, he is again imprisoned and sentenced to death until Matilda, with whom he falls in love, helps him escape. Near the end of the novel, Theodore reveals his back story that he was enslaved by pirates, only to be freed by Christians many years later, and has been working as a farmer in Otranto for the past two years. Father Jerome reveals that Theodore is not only his son but also a direct descendant of Alfonso and the rightful ruler of Otranto. After Matilda’s death, Theodore takes over Otranto and marries Isabella as its rightful ruler the rightness of his rulership is supported both by his bloodline and by his always noble behavior.

(6ii)
Matilda is the beautiful 18-year-old daughter of Manfred and Hippolita, and Conrad’s sister. Matilda is intelligent, pious, and completely devoted to her mother. Though she originally intended to become a nun rather than marry, she falls in love with Theodore and helps him escape her father. Seeing her in a church with Theodore, Manfred thinks she is Isabella and accidentally kills her. She dies as an innocent, and her death transforms her father who immediately repents of all of his actions. In other words She further played a role that gives aid to Theodore. Learning that Theodore is in the chapel with a woman, the jealous Manfred goes there and stabs the woman, only to learn that he has killed his daughter Matilda.

(6iii)
He is The story’s antagonist, Manfred is the ruler of Otranto, the grandson of the man who usurped Otranto from its former rulers. He is husband to Hippolita, and father to Matilda and Conrad. Quick to anger, clumsily manipulative, and at times illogical, he constantly prioritizes his lust for both power and Isabella over any faith or morals he may have. The story presents his overwhelming desire for power as indicative of both his, and his entire familial line’s, unsuitability for rulership. Fearing an ancient prophecy about the end of his reign, seeks first to secure his family’s rulership of Otranto by marrying his son Conrad to his ward Isabella, who through her father has a rightful claim. After Conrad dies, Manfred hunts for Isabella throughout the castle in order to produce a new heir who would have a rightful claim to rule. Despite his existing marriage to Hippolita, the fact that Isabella is his own ward, and Father Jerome’s admonitions, he seeks a divorce and almost manages to secure Isabella’s hand in marriage from her father Frederic. When his plans fail and he attempts to murder Isabella, he accidentally kills his own daughter. In shock at having murdered Matilda, he undergoes a drastic personal change: he repents, reveals that he is not the rightful ruler of Otranto, and retires to a convent as a monk. In other words He further played the roles in the castle of otranto as an arrogant, unprincipled man who lives in the shadow of a curse. manfred is the lord of otranto, he inherited it from his own father, “DON RICARDO”, he is the villain in the casle of otranto, he is resposible for the most dastardly After Manfred’s son is mysteriously killed on his wedding day, Manfred plans to divorce his wife and marry the promised bride himself. After much frightening supernatural intervention, Manfred surrenders his claims to Otranto; he and his wife then enter neighboring convents.

(6iv)
Lord Frederic is the Marquis of Vincenza and Isabella’s father. Throughout most of the novel, he is known as the closest male blood relative to Alfonso with the strongest claim to ruling Otranto, but has been missing for years. After his wife died in childbirth, Frederic joins the Crusades and is captured by infidels. After a vision shows him Isabella is in danger, he meets a hermit who instructs him to dig up a giant sword upon which is a mysterious prophecy. Seeking to free Isabella and to become ruler of Otranto, he brings the sword and a host of men to Otranto, where he falls in love with Matilda and almost trades daughters with Manfred until the ghost of the hermit reminds him of his quest. Upon learning of Theodore’s true identity, he relinquishes his claim to Otranto and offers Isabella’s hand in marriage to Theodore. Frederic is an interesting character, and a kind of middle-ground between Manfred and Theodore; never as power- or lust-hungry as Manfred, but more susceptible to corruption than Theodore.