Refresh in every 30minutes starting from 12 Midnight 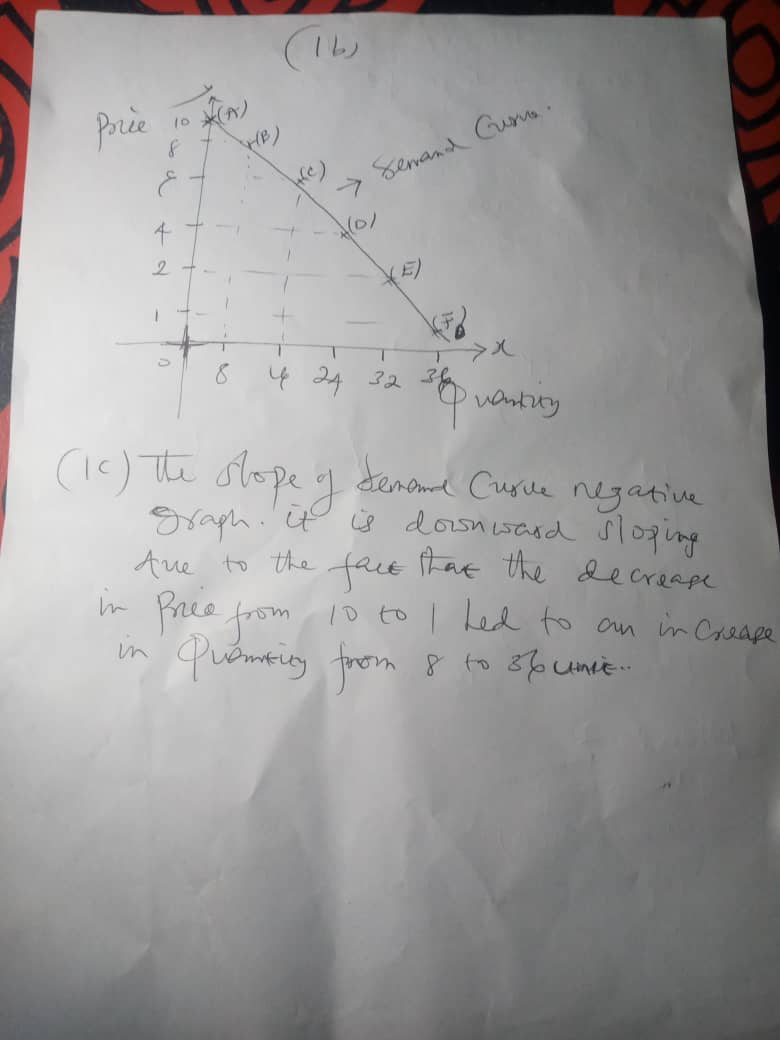 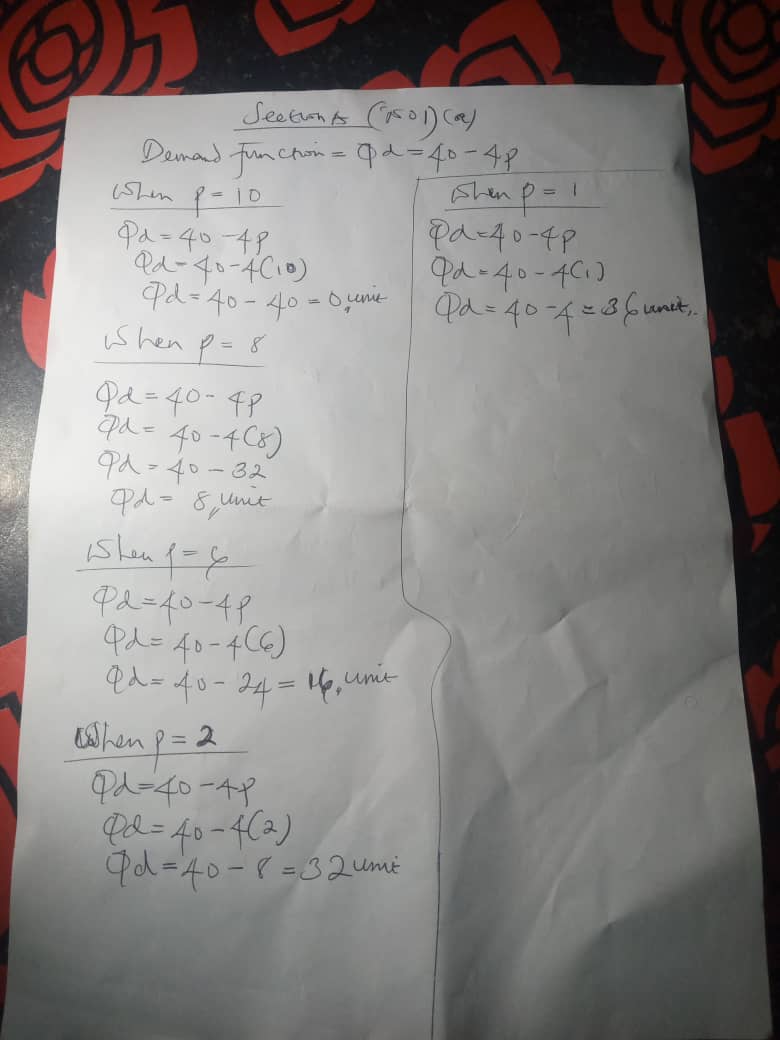 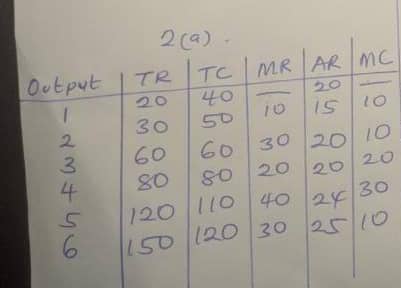 (2b)
The condition necessary for profit maximization is MC = MR 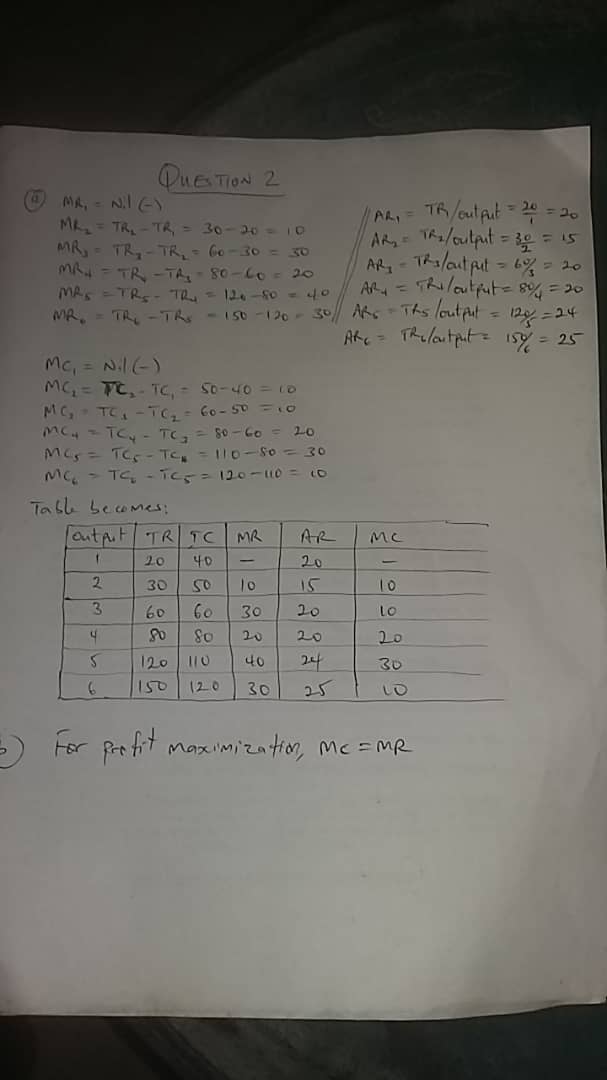 (3ii)
Standard deviation is the square of variation.
For example
SD= ∑f(x−x)²/∑f

(3iii)
Range: This refers to the highest number of items and the lowest in a given set distribution e.g from the above table
The Range= 8-2= 6

​(3iv)
Table: This can be defined as the logical and systematic arrangements of data in rolls and columns . Eg Below are numbers of students and their scores in economics test.

(4a)
Labour can be defined as all human efforts of any kind, either skilled or unskilled, mental or manual, directed towards the production of goods and services. The rewards for labour as a factor of production comes in form of wages and salaries.

(5i)
Tax: A tax is a compulsory levy imposed by a public authority against which tax payers cannot claim anything. It is not imposed as a penalty for only legal offence. The essence of a tax, as distinguished from other charges by the government, is the absence of a direct quid pro quo (i.e., exchange of favour) between the tax payer and the public authority.

(5ii)
Rates: Rates refer to local taxation, i.e., taxation levied by (or for) local rather than central government. Normally rates are proportional to the estimated rentable value of business and domestic properties. Rates are often criticised as being unrelated to income.

(5iii)
Surplus of the public sector units: The government acts like a business- person and the public acts like its customers. The government may either sell goods or render services like train, city bus, electricity, transport, posts and telegraphs, water supply, etc. The government also earns revenue from the production of commodities like steel, oil, life-saving drugs, etc.

(5iv)
Fine and penalties:
They are the charges imposed on persons as a punishment for contravention of a law. The main purpose of these is not to raise revenue from the public but to force them to follow law and order of the country.

(5v)
Gifts and grants: Gifts are voluntary contribution from private individu­als or non-government donors to the government fund for specific purposes such as relief fund, defence fund during war or an emergency. However, this source provides a small portion of government revenue.
==============

(6a)
Overpopulation is the discrepancy between the structure of the population and economic growth in a specific, country or group of countries under a specific economic.in other words it a system within a definite historical epoch.

(ii)Extinction: The effect of overpopulation on the Nigeria’s wildlife is also a major issue. As demand for land grows, so too does the destruction of natural habitats, such as forests.

(iii)Resource Consumption; As the population grows, so too does the amount
of resources needed to keep so many people alive. Food, water and fossil fuels are all being consumed at record rates, placing greater demands on producers and the planet itself.

(iv)Increased Intensive Farming As population has grown over the years, farming practices have evolved to produce enough food to feed larger numbers of people. However, intensive farming methods also cause damage to local ecosystems and the land , which may pose
problems in the future.

(v)Overpopulation Could Lead to a Food Shortage: While the population has been rising as a result of increased food production, this production has limits. More mouths need to be fed. Without an increase in food production that matches the rising population, deprivation and hunger will be on the rise and each individual will have access to smaller quantities of food.

(ii) Lack of industrial growth and social amenities: Nigeria do not have industries that are capable of employing enough workers. Labour tends to be unavailable when there are no social amenities in the area. This leads to unemployment

(iii) Over population and Deficiency in demand: When a country's population is too high, it tends to produce many workers and such workers may not have jobs to do, thereby leading to unemployment. An overall in demand for goods can lead companies to retrench workers.

(ii) Price Stability: Maintaining price stability in the market is another function a middleman performs. Many a time the middleman absorbs an increase in the price of the products and continues to charge the same old price to the customer.This is because of the intra middlemen competition. The middleman also maintains price stability by keeping his overheads low.

(iii) Promotion: Promoting the product and services in his territory is another function that the middlemen perform. Many of them design their own sales incentive programs aimed at building customer traffic at their outlets.

(iv) Title: Most middlemen take title to the goods and services and trade in their own name. This helps in diffusing the risks between the manufacturer and middlemen. This also enables middlemen being in physical possession of the goods, which enables them to meet customer demand at the very moment it arises.

(v) Financing: Middlemen finance manufacturers operations by providing the necessary working capital in the form of advance payments for goods and services. The payment is in advance even though credit may be extended by the manufacturer, because it has to be made even before the products are bought and consumed and paid for by the ultimate customer.

(9a)
market is a place where buyers and sellers can meet to facilitate the exchange or transaction of goods and services. In Other examples include the black market, auction markets, and financial markets. In other words Markets establish the prices of goods and services that are determined by supply and demand.

(9b)
(i)It's a type of competition between others in the industry. This means more than one company is selling a similar product and competing in that market.

(ii)Everyone offers a similar product, but that product can't be completely substituted. In other words, while other companies may sell goat's milk soap, none of them are exactly like Betty's soap because they do not contain all of the exact same ingredients.

(iv)Every company makes their own decisions about their products. So, they decide what price to sell their soap at and how many to make and sell. Because there's such a demand for goat's milk soap, Betty keeps a steady supply. And finally…

(10i)
To give confidence to members by making the general resources of the Fund temporarily available to them under adequate safeguards, thus providing them with opportunity to correct maladjustments in their balance of payments without resorting to measures destructive of national or international prosperity.

(10ii)
To promote exchange stability, to maintain orderly exchange arrangements among members, and to avoid competitive exchange depreciation. In other words to shorten the duration and lessen the degree of disequilibrium in the international balances of payments of members.

(10iii)
To assist in the establishment of a multilateral system of payments in respect of current transactions between members and in the elimination of foreign exchange restrictions which hamper the growth of world trade.

(10iv)
To facilitate the expansion and balanced growth of international trade, and to contribute thereby to the promotion and maintenance of high levels of employment and real income and to the development of the productive resources of all members as primary objectives of economic policy.

(10v)
To promote international monetary cooperation through a permanent institution which provides the machinery for consultation and collaboration on international monetary problems. In other words IMF was established to provides member countries with technical assistance to create and implement effective policies, particularly economic, monetary, and banking policy and regulations.

(11a)
nationalisation, is the process of transforming privately owned assets into public assets by bringing them under the public ownership of a national government or state.

(12a)
balance of payments is a statement of all transactions made between entities in one country and the rest of the world over a defined period of time, such as a quarter or a year.

(12b)
(i)Trade Policy Measures: Expanding, Exports and Restraining Imports: this method can be used to correct unfavorable balance payment by Trade policy measures to improve the balance of payments refer to the measures adopted to promote exports and reduce imports. Exports may be encouraged by reducing or abolishing export duties and lowering the interest rate on credit used for financing exports. Exports are also encour­aged by granting subsidies to manufacturers and exporters. Besides, on export earnings lower income tax can be levied to provide incentives to the exporters to produce and export more goods and services.

(iii)Exchange Control: it is all the exporters are ordered to surrender their foreign exchange to the central bank of a country and it is then rationed out among the licensed importers. None else is allowed to import goods without a licence. The unfavorable balance of payments is thus rectified or corrected by keeping the imports within limits. In other words No reliance can be placed on any single tool in unfavorable balance of payment.