(5a)
The writer was reported to the principal by Mr. Francis because of their unserious behaviour in his class.

(5b)
He was care-free to all the students during his class.

(5c)
He looked askance at him and then consulted his record.

(5d)
He has been intelligent academically but with many dents on disciplinary cases.

(5e)
This is because they never had any knowledge of the second test prior to it and never took their classes serious.

(5f)
(i) Relative clause
(ii) It modifies the pronoun "those"

(5g)
He became more careful with his questions


Dear Sophia,
I received the news of your admission with great excitement. I am very glad you made the merit list; it shows you have been up and doing about your academic work. Dad was so impressed and full of praise for you when he called me on phone. I am aware you have started already. How are you doing? Hope you are coping?
I'd like to tell you a few things about the school. Firstly, you are lucky the school has moved to a new location which is nearer to the house. So you won't have issues with transportation. As you may have seen already, the compound is very big enough to accommodate a standard sporting field. During exam period, I used to prefer there for reading because it is usually less crowded with no noise.
The school is very competitive. For instance, if a student failed either Mathematics or English, he or she would be promoted on trial, provided more than half of the other subjects were passed. Failing both key subjects is usually an outright repetition of that class. And when it occurs again, it will be expulsion. So, it is very important you maintain your academic tempo; and if possible, try to improve it because you will be studying with sound students from different academic backgrounds.
Secondly, I am proud of the caliber of teachers in that school - always willing to impart and are disciplined too. Always endeavour to listen in class and write only when it is time for writing. Ask questions for clarity. Any other issues you might have, chat me up via mummy's WhatsApp line.
I wish you well in your academics. Try to be among the top ten. I hope to hear from you soon of your progress.
Take care!
Yours truly,
Peter 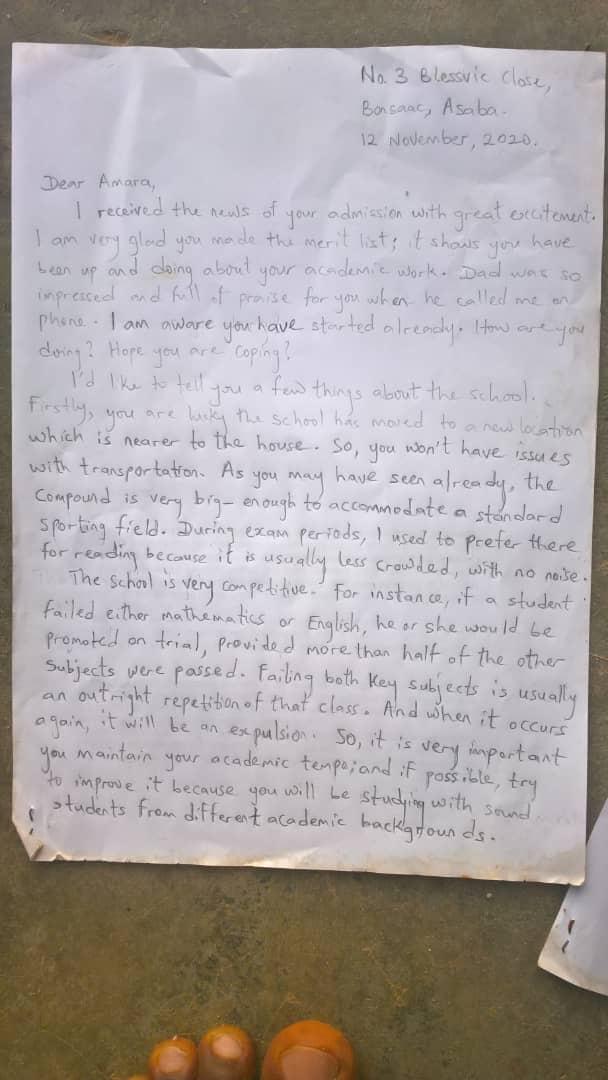 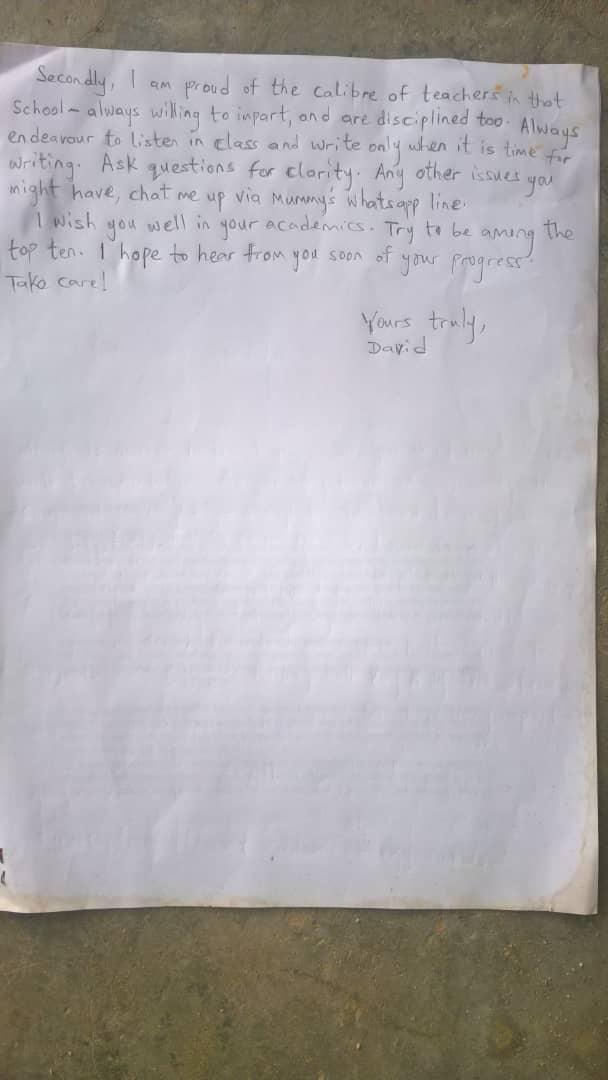 (4)
Once upon a time there lived a carefree and complacent young man named, Jagu. He had high dreams but low actions. He often dreamed and boasted that one day he will amaze the world with his feats. His father was a very wise man. He wanted to put some sense in him. He wanted to instil in him that if he wanted to be successful, he must work for it. So, he made a plan to teach his lesson. He took the help of a fortuneteller. He sent him to Jagu. The fortuneteller said to Jagu. “I am a famous fortuneteller; I know something big is going to happen in your life on the first day of the next month. Take this flower and keep it with you.” Jagu was quite excited to get the flower from the fortuneteller. He went home and told the incident that success was coming his way. He will prove it to the world on the first day of the next month. He told all his friends and relatives. Everyone was curious to see as to what would happen on the first day of the next month. The most excited person was Jagu himself. The night before the first day of the next month he could not sleep. And the next morning as he woke
up, he found the day to be as normal as the other days had been. No news of any success came. The day came and just went ordinarily. Jagu became quite dejected. At the right time his father came and told Jagu, “Success does not come with dreaming and predicitons, you have to work hard and win it and create it. Go out, and create your own success with efforts.” Jagu learnt the lesson and stopped counting his chickens before they were hatched..

SECTION A: CONTINUOUS WRITING
You are required to answer only one question from this section. Your answer should not be less than 450 words. All questions carry equal marks. You are advised to spend about 45 minutes on this section.

(1) Your sister has gained admission into your former school. Write a letter giving her information about the school and advise her on how to behave well while in the school.

(2) Write an article suitable for publication in a national daily on the rising cases of ritual killings in your community and suggest measures to curb the trend.

(3) You are a chief speaker in a debate on the topic Religious studies should be Made Compulsory in Secondary Schools. Write your argument for or against the motion.

(4) Write a story that clearly illustrates the saying: Do not count your chickens before they are hatched.