SECTION A
(Answer ANY TWO Questions)

(1a)
Optimum population can be defined as the number of people that can be supported by the available resources in an area, so as to achieve the highest possible standard of living.

(1biii)
Birth rate: Birth rate is also known as Natality rate. It refers to the rate at which children are being given birth to in that country. Generally, high birth rate may lead to increase in population or over population while low birth rate can lead to low population. As a results of improved medical services, death rate has reduced while birth rate has improved. Improved standard of living encourages men to marry more wives, thereby increasing birth rate.


(2a)
(i) Export and Import of goods: Goods produced in Nigeria are exported to other countries through seaports. Also goods purchased from other countries are also brought into the country through the seaports thereby promoting international trade.
(ii) Raw materials for industries: Through seaports, raw materials are imported for industries eg Iron ore from Liberia for iron and steel complex in Adaokuta.
(iii) Employment opportunities and fishing: Seaports provides jobs for many people through various activities within the Port eg clearing agents, exporters and importers. The development of seaports further promotes intensive fishing around the port which also help to reduce unemployment
(iv) Revenue to government and tourism centre: Tariffs and demurrage from imported goods safe source of revenue to the government. Seaports is also centre's of tourist attraction.

(2b)
(i) Problem of caused by water weeds such as water hyacinths.
(ii) Problems of smugglers
(iii) Inadequate port facilities
(iv) Problem of port congestion

(2c)
(i) Security personnel should be trained and equipped to check the activities of smugglers
(ii) Permanent solution should be made known ọ check the growth of water hyacinths and its attendant problems.
===========

(3a)
(i) Traffic congestions: Cluster of industries leads to congestions in traffic. Increased congestion can affect business productivity by increasing operating costs and reducing the size of market areas served from any given business location.
(ii) Shortage of social amenities: Concentration of industries pave way for shortage of social amenities as a result of competition.
(iii) Environmental pollution: It causes environmental pollution due to the presence of so many industries. Heavy industry emits many potentially hazardous pollutants into the air which can affect health. A situation whereby lots of heavy industries clusters at an area, it is likely that the health of people around that area would be greatly disturbed.
(iv) Uneven development: The presence of many industries in a particular place causes uneven development, Having industries centered in one particular area will make it difficult for areas where industries are not found to develop. It will lead to a one-sided development.


SECTION B
(Answer ANY TWO Questions)

(4b)
(i) Soil erosion: The exploitation of vegetation resources such as timbers leads to soil erosion which affects agricultural development.
(ii) Soil leaching: Due to depletion of vegetation cover, the soil available for production is now exposed to heavy leaching of the soil nutrients.
(iii) Flooding: Continuous removal of vegetation can expose the soil to flooding which makes the soil unfit for agriculture 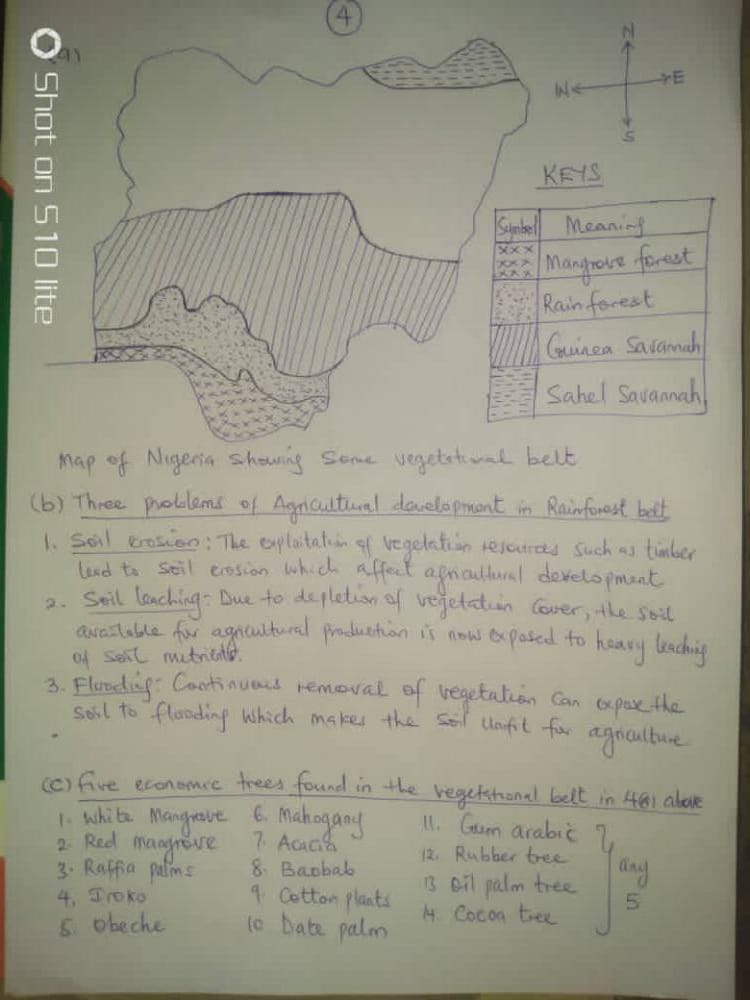 (5a)
(i) H.E.P. (Hydro Electric Power): This is the generation of electricity from water. This is achieved through damming of rivers and the use of river water to turn or drive turbines. Example of H.E.P generation in Nigeria is kainji dam on river Niger Nigeria

(ii) Coal: A coal fired power station or coal plant is a thermal power station which burns coal to generate electricity, Example can be found in kogi and Enugu State with a capacity of 2000MW with 1000mw in each.

(5b)
(i) Inadequate capital to construct and maintain power generation: Due to lack of funding by the federal government to power supply generation it affect the static power supply and makes the power supply in Nigeria to be floating

(5c)
(i) Proper funding to the generation of power supply in Nigeria by adding good amount of money during budgeting.
(ii) Government should train his personnel on technology know-how in order to provide adequate and proper skilled labour that can handle and execute power generation in terms of technology.

(6a)
(i) Increase in Gross National product (GNP): Industrial sector through its operation like payment of taxes, increases the earnings accruing to the nation

(ii) Infrastructural development: The establishment of an industry in a place stimulate the development of infrastructures like road, telephone, electricity and pipe borne water.

(6c)
(i) Stable government and good government policies
(ii) Provision of transports and communications facilities
(iii) There should be exploitation of raw materials locally for industries
(iv) Establishment of more power plants such as Thermal or hydro electricity plants.

We Need only 160 Candidates for this Year Jamb Cbt Runs. Only few slot left.. Also note that Our 2022 WAEC GCE FIRST SERIES Midnight Answers Subscription ends on Tue 25th Jan 2022. Note: we don't accept calls. Please, we beg you in the name of God, do all your daily subscriptions AT LEAST a day before the exam, we may not have time to attend to you for daily subscriptions on the exam day.