Plasmolysis: Filament of Spirogyra in pond of water was placed on a glass slide. It was observed under low power of the microscope and the cells were found to be turgid. The pond water was absorbed using a filter paper. A drop of strong salt solution was added and was left for a few minutes. It was observed that the cell wall was leaving a gap 'copied from g i s t p o w e r . c o m free' between the cell wall and the plasma membrane, showing that exosmosis has occurred or the cells have been plasmolysed.

(ii) Peel off the tubers with a knife

(iii) Scoop out a portion of the tubers with a knife

(viii) Sugar solution is put in fresh cube A, one fresh cube B is filled with water and the boil cube C.

(i) Level of sugar solution in A has risen

(ii) Levels of solutions in B and C remained the same

(iii) Osmosis does not occur in dead tissues as observed in C.

(1b) Role of diffusion in the activities of organisms:

(i) Gaseous exchange in the gills e.g. fish

(v) Absorption of end products of digestion by the villi of the ileum into the blood.

(i) Flowers are Usually small, dull colored and scentless and thus not attractive.

AIM:- To prove that oxygen is necessary for germination.

Take two conical flask with a cork and mark them A and B respectively.

Place a wet cotton wool in each flask with some soaked Pea seeds. Pyrogallic acid absorbs oxygen so  a test tube of in flask B in such a way that the cemical dosent drop in the flask.

In flask A hang a test tube of plain water.

RESULT:- Oxygen is necessary for germination

Obtain a healthy young well watered potted plant. Remove the bark of a stem with its associated phloem in a form of a ring ring and the control, the bark is removed but the phloem is left intact. Leave the ringed plant for a week. It will be observed that the section above the ring is found to be swollen. It is also observed that the sugar level at the swollen section is greater than the region below the ring.

In the control experiment, there were no swollen at the section above the ring. Since the ringed involved the removal of the phloem tissue, the sugar could not be translocated across the ringed section. It implies that the phloem is the pathway for the transport of organic materials in plants.

Sensory cell is a cell that receives a particular stimulus (such as sounds, light, touch, smell, taste, and temperature) and converts it to impulse to be transmitted to the brain or nervous system

(ii) Ear - for hearing and balance

(v) The skin - for touch, temperature and pain

8 - 10CM DIAGRAM OF VERTICAL SECTION OF A MAMMALIAN SKIN 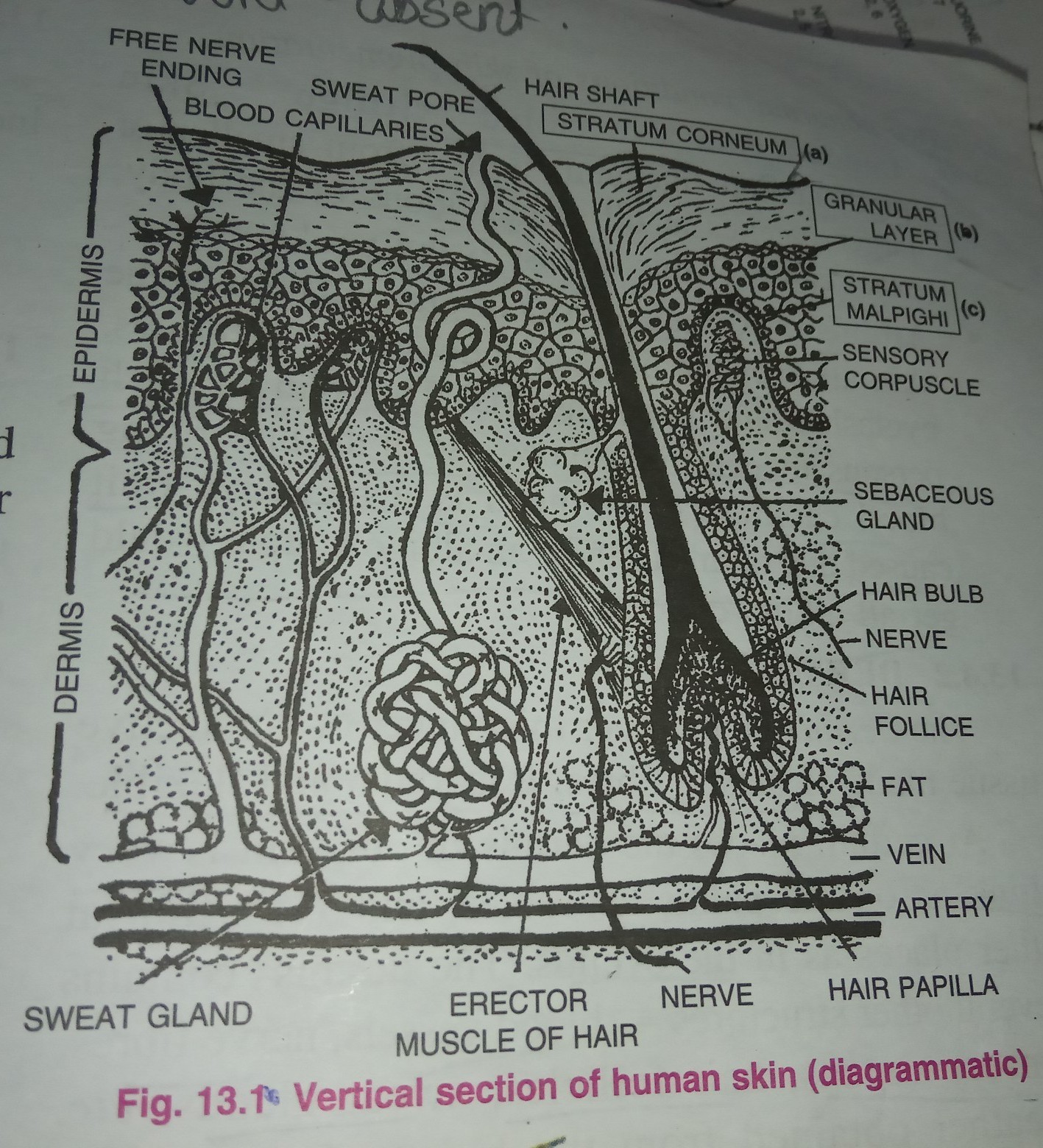 (a) Leucocytes helps in keeping the body by fighting disease.

(b) Helps in the production of Antibodies.

(ii) The mechanism of blood clotting is a complicated one. When blood vessels are damaged an enzyme known as thrombokinase is released by the damaged tissues and blood platelets. Thromobokinase 'copied from g i s t p o w e r . c o m free' converts the protein prothrombin, normally present in the pkasma, to thrombin. Calcium ions mist be present before this can take place. Thrombin is also and enzyme. It catalyzes the conversiyof the so lube protein fibrinogen to a meshwork of insoluble threads of fibrin. These fibrin threads entangle the blood cells and the whole mass forms a clot. Vitamin K is also essential for the process of blood clotting.

(a) The clotting of blood helps to seals the wound, preventing excessive loss of blood.

(b) Blood clotting helps to stop foreign particles from entering the bloodstream.

(i) Apply direct pressure to the bleeding wound.

(ii) Raise the injured area that is the lower arm:  If an arm is injured, you could apply an arm sling or elevation sling. If there has been any contact with blood or any other body 'copied from g i s t p o w e r . c o m free' fluids, wash your hands or any blood splashed on the skin thoroughly with soap and water as soon as possible after the incident.

(iii) If a foreign body is embedded in the wound.Hold the padding firmly in place with a roller bandage or folded triangular bandage applied in a criss-cross method to avoid pressure on the object.

(iv) Keep the patient at total rest: Even if the injury involves the arm or upper part of the body, the patient should rest in a position of greatest comfort for at least 10 minutes to help control the bleeding.

(v) Seek medical assistance: If the wound appears to be minor and the patient is able to travel by car, arrange an urgent appointment with a local doctor to assess and treat the injury.

Chromosome: This is thread-like structure of nucleic acids and proteins, found in the nucleus of living cells, carrying genetic information or genes.

Genotype: It is the genetic make-up of an organism in terms of a particular set of alleles it possesses.

Sex linked genes: This refers to a single gene on a sex chromosome which control certain characters and are inherited together with the sex.

Heterozygote: This is a cell or organism that contain two different alleles of a particular gene or genes.

Is the structural similarity in features That exist or abound in many groups of organisms; Which show them to have a basic body plan;

Which points to a common ancestor or origin

Embryology is the study of stages in the development of embryo in various organisms. A study of comparative embryology provides further evidence for evolution. A very young 'copied from g i s t p o w e r . c o m free' human embryo looks very similar to very young embryos of other mammals, birds, reptiles, fish and amphibians. The structure and mode of formation of the embryonic membrane: chorion, amnion, and allantois are all similar. All these features are related to the fish (which lives in water) indicating that terrestrial vertebrates descended from common ancestors who lived in water.

(i) It leads to competition.

(ii) Decline in the rate of reproduction


We Need only 160 Candidates for this Year Jamb Cbt Runs. Only few slot left.. Also note that Our 2022 WAEC GCE FIRST SERIES Midnight Answers Subscription ends on Sat 29th Jan 2022. Note: we don't accept calls. Please, we beg you in the name of God, do all your daily subscriptions AT LEAST a day before the exam, we may not have time to attend to you for daily subscriptions on the exam day.